The Tattooist of Auschwitz is a novel about love, courage and human tenacity in the face of destruction and devestation. It is based on years of interviews author Heather Morris conducted with real-life Holocaust survivor and Auschwitz-Birkenau tattooist Ludwig (Lale) Sokolov.

Lale is comes ffrom Slovakia to Auschwitz in 1942, and immediately stands out to both the guards and fellow prisoners. Given the privileged position of Tätowierer– the tattooist – his role is to mark his fellow prisoners with an identification number. One of them is a young woman, Gita, who Lale falls in love with immediately. The book follows their romance and relationship through the hardest of circumstances, and the warmth they have for one another radiates through the prose. 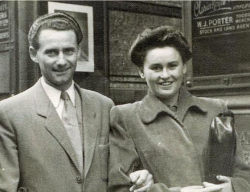 Lale is a compelling character who raised morale of those he was with as  Prisoner Number 32407 at Auschwitz II–Birkenau and provides a lightbeam of humanity to the reader. Despite its setting, the focus is not on atrocities committed in the concentration camps, although murder, gassing and rape are alluded to.

Instead this is a book about hope and a fierce desire for life that can keep pulling people through even the darkest of times.