The audience are warned – ‘this show contains white lycra.’ But what else would you expect from Abba? Mamma Mia! is now in its eighteenth year, and shows no signs of slowing down. At Canterbury’s Marlowe Theatre one summer evening we’re transported to a Greek island where a wedding is about to place, but even under such summer sun and balmy skies, things are stressful. The narrative is strong, each song fitting perfectly as an aid to the storytelling rather than being shoehorned in. Waterloo, Dancing Queen, Honey Honey, Knowing Me, Knowing You are all in there, accompanied by bold dance routines and energetic acting. 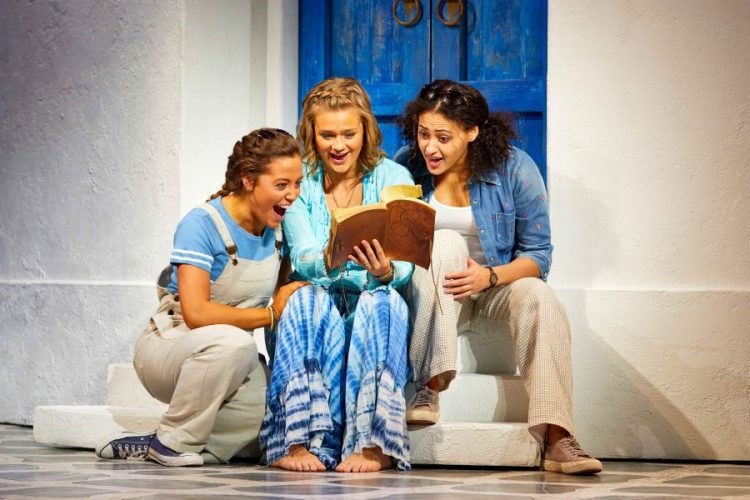 For anyone who doesn’t know the story, we’re at Donna’s Taverna on the Greek island of Kalokairi. Donna (Helen Hobson) has been here for twenty one years, the set of white walls and blue doors under clear skies and olive trees having been her business and home since she came to Greece as a teenager. Here we see her daughter Sophie (Lucy May Barker) on the eve of her wedding to Sky (Fia Houston-Hamilton), and she wants to have her dad there to give her away. Trouble is, she doesn’t know who he is.

Vibrant and fun, it’s a feel good tale of the highest degree. Even those who don’t do musicals find themselves getting pulled in – no doubt due to some of the finest pop songs ever written. Donna’s old friend Rosie (Gillian Hardie) is hilarious with her scouse wit, playing off the third friend glamorous Tanya (Emma Clifford) with quick comedy. The three ‘dads’ – Sam, Bill and Harry (Jon Boydon, Christopher Hollis and Jamie Hargath) each have their own fully formed characters and shine in their solo spots as well as plot drivers. 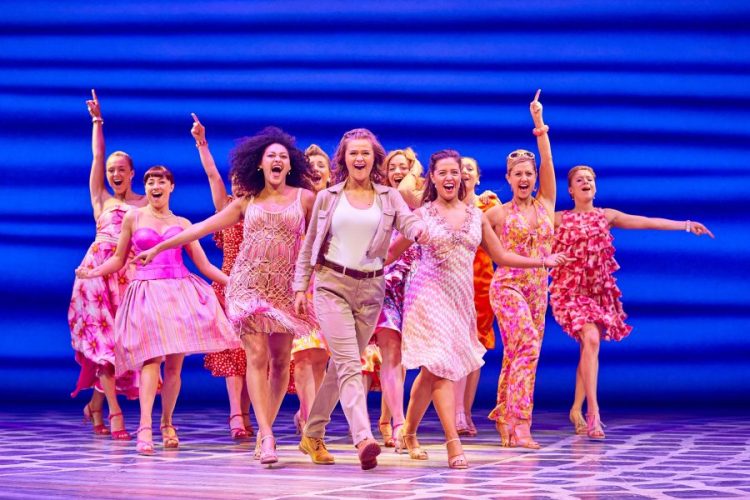 Dancing in wetsuits and slippers makes for some fun slapstick and skill, and deadpan humour drives some of the best jokes. There’s some poignant moments, such as Donna helping Sophie get ready for the wedding, singing Slipping Through My Fingers as she does. The banter bouncing between Sky and his friends is realistic, and the deep friendships that have lasted many years between the girls touching. By the time it culminates in an Abba medley that finally gets the audience up and dancing, there’s plenty of smiles both on and off the stage.