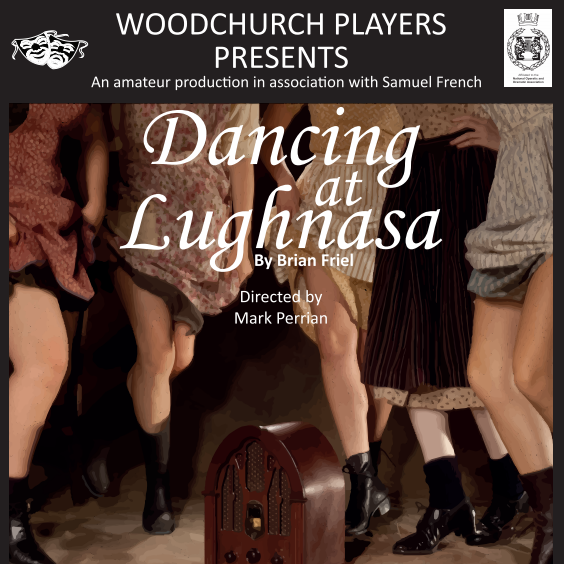 In a little village outside Ashford, a local group are putting paid to the idea that creativity and village life are dead. The Woodchurch Players, founded in 1980, have performed everything from drama to family panto, musical theatre to revue shows, shorts and epics, and their diverse CV includes Rebecca, Allo Allo, She Stoops to Conquer, A Matter of Life and Death, Treasure Island and the play version of Sweeney Todd.

This spring’s performance, directed by Mark Perrien , is their 99th show, and they’ve picked something that can appeal to all. Dancing at Lughnasa, performed at Woodchurch Village Hall, and from Thursday 18th May until Saturday 20th May, might be familiar to some. Written by Brian Friel over twelve days in 1989, it is a touching and heartfelt play about five sisters in 1930s Ireland. Bittersweet in tone and temper, it explores the relationship between the sisters and is cleverly narrated many years later by Michael, the son of the youngest sister Chris. Michael is to all intents and purposes Friel. Described as a ‘memory play’, it centres around the Mundy girls – Friel’s mother and her four sisters. There’s love interests, dancing, laughter and plenty of Irish charm – but knowing that it’s based on true events of loved ones who have passed away gives it a clear tenderness.

Rehearsals are going well by all accounts. It’s busy of course, but that all part of the fun. In fact, gathering together for rehearsals before it all comes together is just like hanging out with friends in many ways.

There are a myriad of benefits to being part of groups like this. Charlotte Maughan-Jones, who plays Chris explains how before she got involved with the local theatre scene, the stress of her job and changing circumstances had become too much. ‘Having just graduated and moved back home to Ashford to start my job, I found that all of my old school friends were no longer around, and I was, for the first time, very alone. I had a stressful job at the time and had given up all my hobbies to concentrate on my career – this proved disastrous for me and I subsequently spent time on antidepressants and in therapy. I have met some of the most amazing people through my drama exploits and I feel richer for it.’

Charlotte got involved with the Woodchurch Players, whom she describes as one of the most inclusive and supportive groups around. ‘The society were so friendly and welcoming to me as a newcomer and I fell in love with the intimate setting for the shows.’ What this means is that there are always opportunities available. Even those who believe they have no acting skills (something that should always be explored!), or just prefer not to be on stage, can get involved. No production can take place without technicians, lighting, costumes, prompting, direction – and those with existing skills or looking to develop theirs are always welcome.

In fact, it plays a major role in the audience’s engagement with a performance. Here, as Michael recounts the summer in his aunts’ cottage when he was seven years old the green fields of the fictional town of Ballybeg Ireland’s County Donegal play out behind him, whilst the period costumes immediately immerse you in August 1936.

The casts range from new members to existing, young and old, male and female. Every year the pantomime is filled with enthusiastic children taking part and becoming part of their local theatre. For Charlotte Woodchurch Players ‘embodies everything that a local community should be – people of all ages, all backgrounds and all talents coming together to do something they love, and something they’re passionate about.’

Come along and find out more whilst you are entertained with song, dance and drama at Dancing at Lughnasa. Tickets are available here or in person at the Woodchurch Information Centre.