Back in 1948 Michael Powell and Emeric Pressburger took Hans Christian Andersen’s fairytale about a pair of red ballet shoes which force their wearer to dance until she dies, and turned it into a technicolour parable on the all-consuming nature of art. Last year, as the culmination of a twenty year ambition and thirty year birthday celebration,  The Red Shoes was remade into another masterpiece by New Adventures artistic director Sir Matthew Bourne and premiered at London’s Sadler’s Wells.

Now on tour around the country, this bold and seductive production is one that will entrance fans of film, theatre and dance alike, just as it did at Canterbury’s Marlowe Theatre.

Opening with dramatic chimes and a flickering curtain, we are immediately drawn into the film through a conductor waving his baton more like a magician and wand through dazzlingly atmospheric lights -courtesy of Paule Constable. It certainly feels enchanting, as well as a bit meta – a window to a screen on the stage observing an audience that we, here tonight, are watching. 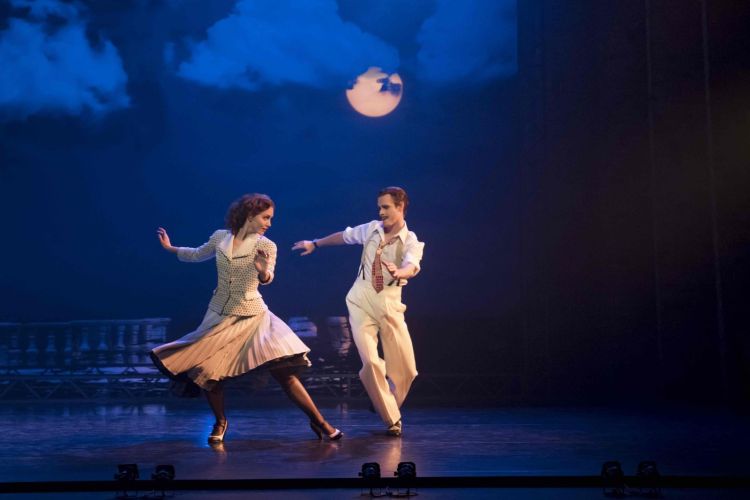 Combining the drama of cinema with the theatricality of performance and romance of dance, it’s a ballet that does not feel like a ballet. This is what Bourne does – takes the familiar and twists it, adds his own ideas and challenges the audience’s preconceptions. And so the career of dancer Victoria Page (tonight played by Ashley Shaw), romantic struggles with composer Julian Craster (Dominic North), and a dedication to dance that is exploited by Boris Lermontov (Sam Archer), becomes not just a fairy tale, but a modern and vibrant piece of populist theatre.

The layers of set design shift between silhouettes and shadows, the stars of the night sky, sumptuous red velvet cinema and the interior of a theatre, as well as France and London. Designed by Lez Brotherston the revolving sections make for a seamless and swift movement between scenes that keep the pace moving. The dance styles are equally multifarious – there’s some jazz, ballet, ballroom and modern all coming into the mix. The dancers, as always, astound us with their talent, and even more so upon learning that the cast rotates every night so that no-one individual plays the same role constantly.

It’s a brief piece at just one hundred minutes long, but means that urgency and passion are retained. Ebbing gently at times, whirling with vivacity at others, the pace and passion are carefully managed. Sound is used to devastating effect by designer Paul Groothuis, temporarily throwing the viewer, and orchestrator Terry Davies weaves extracts from Bernard Herrmann’s film scores into the music that swoops as much as the dance itself.

As smoke billows across the stage and lights glare out, the only sounds we hear uttered by the performers are those of the fallen Victoria as she is hit by a huge steam train. The climatic drama here is breath taking and tragic, and the sadness felt testimony to the emotional tugs created in such a short space of time.  Melodrama and glamour mingle with sentiment and romance in a fashion that is rarely seen. Again, Bourne has taken leaps with imagination and confidence, and pulled off a masterpiece. Matthew Powell said that ‘The Red Shoes told us to go and die for art.’ You get the feeling Bourne would too.

2 thoughts on “The Red Shoes at Marlowe Theatre”