‘Ain’t nothin’ more fun than rock’n’roll.’ A line said once, but a sentiment repeated throughout Million Dollar Quartet, the ninety minute jukebox stage show that tells the story of a night in December 1956 at Sun Records, Memphis. Four stars, Elvis Presley, Carl Perkins, Johnny Cash and Jerry Lee Lewis gathered and improvised music together in the studios owned by Sam Phillips, the man behind Sun Records and the guy who had given each their break.

It’s a true story. There’s photos of the foursome together, Sun Records released the recording, and a next day newspaper report in the Memphis Press-Scimitar – the headline from which the play takes its title. But it’s also the stuff of myth and legend, blurring the lines of fact and fable, and that kind of magic creates a good night out.

All the music is played live, and you can feel the quiver through the streets from the off as a there’s a quiffs and riffs explosion on stage as they break out Blue Suede Shoes, Hound Dog, Walk the Line and Great Balls of Fire. Casting Ian Talbot’s production must have been tough, requiring musicians, actors and entertainers, but it’s a success.

No one artist is celebrated more than another. Jason Donovan has changed since I last saw him as Scott in Neighbours, but his powerful performance as Sam Phillips reinforces that he is far from being a one strand soap star. Ashley Carruthers as Jerry Lee Lewis is incredible, a real piano virtuoso with fingers that flicker with rhythm. Robbie Durham performs as an authentic Johnny Cash, his voice and demeanour reportedly emoting the man himself, and the voice of Katie Ray as Elvis’ girlfriend Dyanne a breathy revelation. 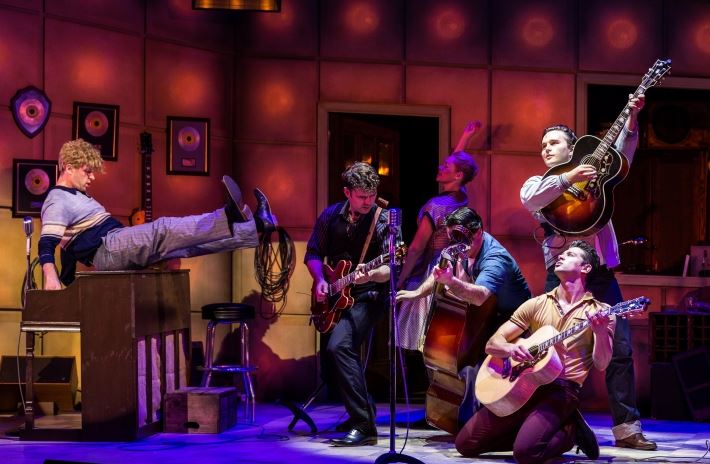 In his quest to ‘find the boy beneath the hit’ (Carl Perkins, played by Matt Wycliffe) or help the ‘hillbilly turn Hollywood’ (Elvis Presley, played by Ross William Wild) Sam had fun – but also challenges. Banter flies across the stage, whisky hits the throat, and the songs are played with gusto and skill. But as the business and pleasure of Sun records merged, friendships and loyalties were tested, and the ‘father of rock’n’roll’ lost out to RCA and Columbia when his boys went onto bigger things.

But were they better? The lives of the four are well known. Drugs, depression and industry manipulation cast a damp light on the musical careers that they had once adored. Career wise things were great ‘but I wish those boys had a little more happiness’ he implores to the audience. The benefit of hindsight is a wonderful thing, and knowing nods and sighs from the audience replaces their glee for a few moments. The social and political context struck me, a millennial living in the south east. The youth may well have been listening to rhythm and blues, but ‘Negro music wouldn’t sell’ and so the face of it all had to be handsome white men. Beneath the bravado of them all was vulnerability and romance that was carefully portrayed.

As we’re called to ‘have some fun tonight’ Elvis Presley’s hips aren’t the only ones shaking.  Jerry Lee Lewis, legs on the piano as he played a tune cries out in challenge to all the naysayers: ‘Rock’n’roll’ ain’t a fad, it’s a damn revolution.’

And one that has lasted.  As the entire crowd is on their feet, voices singing out and there’s a Whole Lotta Shakin’ Goin’ On, this is a celebration of good times indeed.

One thought on “Million Dollar Quartet”