I’ve heard Morning Gloryville described in numerous ways. ‘A social movement.’ ‘Mental – in a good way.’ ‘The. Best. Thing. Ever.’

People who haven’t been to an event (and plenty have – now in twenty one cities around the world the enthusiasm has been spreading since its beginnings in May 2013) tend to raise their eyebrows, either also sneering at the idea of hippies giving one another hugs and proselytizing about the evils of alcohol (why else dance without it?), or in alarm at the idea of not only being awake and active so early in the morning but being so without any kind of stimulants – who does that?! Those who have grin widely at the same time as their eyes flash, fizzing with the delight of their memories. They know something, and they want you to as well. 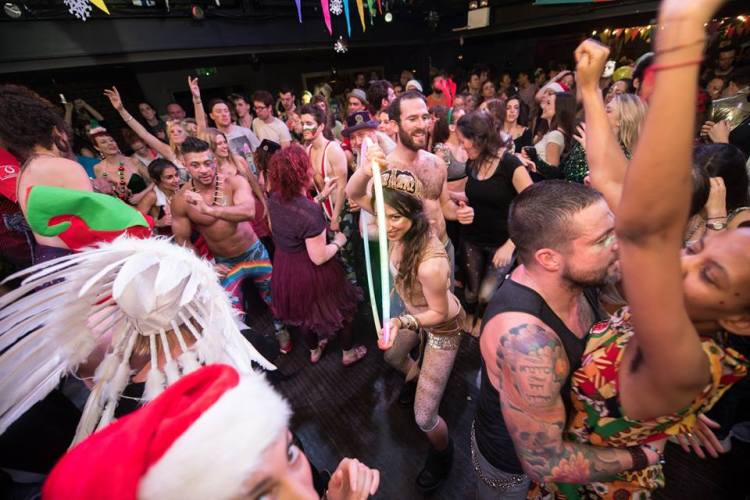 Whether it’s social pressures or cultural conventions there’s a feeling that dancing in the morning, without alcohol, sometimes alone, and especially freely rather than to a routine, is something we just can’t do as adults. It’s weird to operate outside of convention and without inhibitions – and jumping around with strangers in a club at 6.30am challenges those quite strongly.

The weekend editions begin slightly later – everyone deserves a lay in after all – and on my way there at 9am on the last Saturday before Christmas I look like I’ve been on a rather zealous party night out, still coated in glitter. (I come out even more sparkly.) By the time I reach MODE in West London my outfit pales in comparison to the cacophony of shimmer, tassles, neon and dazzle that my fellow clubbers are donning, dancing like an explosion of unicorns on a sugar high.

A rainbow of positivity seems to fill the room, but not in any kind of pretentious or smug way – this is just people having a really bloody good time, as well they might when the sun is shining, the holidays here, and we have nerves that feel the pounding beats, eyes to take in the visual spectacular, ears that hear shaking music, legs to move and arms to wave, and a heart and soul that is alive.

Play, love, creativity, growth, consciousness, harmony, joy, innovation and purpose are all words that the founders of Morning Gloryville use to describe their mission, and all are pretty descriptive of the experience itself. We place so many demands and limits on ourselves that sometimes it’s good to let go – and dance the way through it. It’s hard not to veer into considering the events as something of a commentary or lens on the way we live our everyday lives – but it’s not necessary either. The thing I’ve heard most often said about Morning Gloryville is that it’s just damn good fun. And fun for a mix of people – yogis, music fans, Ibiza clubbers, business professionals, families all dance together on the floor, gather together for massages and bend over in a downward dog.

In many ways it is not difficult to imagine Morning Gloryville – it is a normal club event. Raving, dancing, hands in the air, moving with abandon and joy. It’s only the time of day and the beverages on offer that make the experience different. Different – but not at all lacking. In fact, there’s something else that seems to become apparent. Strangers dance together, or individuals alone. There’s no jostling for the best positions on the dance floor. People pass around drinks without fearing any spike, and due to a full cloakroom we leave our bags on the side, something we would never consider were it 10pm rather than 10am.

It’s the final Morning Gloryville in London of 2015, and whilst there’s no Christmas songs, only a few smatterings of tinsel, and nothing mulled on offer, the sense of friendship, love, warmth and gratitude for life is the closest to the ‘true meaning’ of this season that I’ve found in a long time.

One thought on “Bright eyed clubbing with Morning Gloryville”