Taking place across London and Brazil, Tottenham Court Road and tropical beaches Catch 23 is a novel about a young woman, Jane, and her messy process of being and becoming. In the space of five days she goes on something of a trippy journey, experiencing the sprawling and dreamy universe in her soul, attempting to navigate her ego, and finding that her reality jars with her place in the world’s.

A history of ‘depression, drug addiction and insanity’ means that author Tim Weeks writes from a place of authenticity, with elements of catharsis. Dives into psychological disorders, drug addiction and social disarray are all described in detail, with their surreal nature positioned in realist terms. 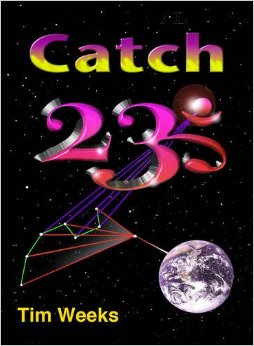 Sentences such as I ‘waited for the next chapter to begin’ and the ‘directors lens’ make apparent the self awareness of the story, but are also suggestive of a choreographed life plan. Who is in charge though, as Jane, Jamie, Nick, Julian, Steve, Heather and Harley all seem to be becoming stuck in this game where the rules keep changing and no one is too sure of the plan.

Acid flashbacks and dirty sex, empty beaches and lapping waves are two types of ‘nature at its most beguiling’ recorded in this novel, as well as all the anomalies and anxieties that life throws up. Life plans, money worries, karma and curveballs all show up and threaten to derail a young person’s hope for a smooth trajectory into life. In the illusive and changing situations, Jane struggles to get a firm grasp on what she wants to know, and her attempts to feel intensely and blank out the pain in pursuit of a halcyon place of security are well recorded. 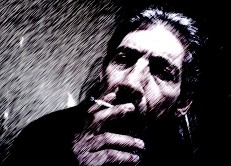 What Jane is aiming for she is not sure, but it’s something and she is seeking it. ‘I just had a question that couldn’t be answered by myself.’ It’s difficult to know, when the cosmos appears to be changing course, the inanimate sporadically becoming infused with life, and chaos reigning.

The tone is that of a compassionate sneer, with all the juxtaposition of emotion that combination conveys. Visceral description is energetic and bold and the narration through shifting lenses makes for a complex but powerful read.

There are some very tender moments. Nick, on the beach, offers the simple compliment ‘You’re going to be okay Jane. You’re special. You’re beautiful and you’re sane.’

At times the meandering tense and tone which Weeks notes in his introduction, warning the reader of the ‘merry dance of mental gymnastics that is to come’ can be jarring and seem inconsistent. But at the same time the almost stream of consciousness merger of external and internal, like when there are gulfs of water in the toilet cubicle of the pub during a rain storm, is captivating and beautiful. The transcendental moments are mingled with the everyday, imbuing meaning in the meaningless, with epiphanies taking place on the tube and lightning bolt moments occurring during the heaviest of comedowns. The ‘conveyer belt of psychosis ridden confusion’ doesn’t seem that far removed from the gritty and concrete realities.

Weeks has obviously thought about these things, having experienced trouble and the therapy to overcome it, resulting in some potent and thought provoking phrases. The line ‘He flew in tight circles around that particular thought and feeling. And all he got in return was pain’ being particularly powerful. It’s an internalised and truthful style, the kind of literature that seeks elucidation and acts as a compass to helping readers to navigate their own life even when it is so centred on itself.

Weeks states that ‘today he is free from the monkey on his back and is busy working for his new life.’ What that new life is, who knows. As his protagonist in Catch 23 says, ‘If try too hard it won’t work, but aim in the right direction and have a party on the way.’ As long as it involves writing, he’s heading in the true direction.

Self published, Catch 23 is available to buy online.