‘So just a kilometre from here is the spot they call Siberia,’ Stuart tells me.  ‘It gets so windy there that in September a train was blown off the track and ended up suspended, carriages hanging off like a piece of string.’ I am significantly smaller than a train, balancing on a bicycle, and there is a cyclone coming, funnelled through the Cook Straight by surrounding mountain ranges. This doesn’t sound ideal to me. But then for someone who has travelled around the world, covering thousands of kilometres through Europe, Central and South America, on a bike bought for only fifty dollars (and subsequently sold it on after), and confesses that  he  loves  to ‘feel the pain and achievement’ from a good hill, the Rimutaka Incline, part of the cycle trail by the same name, is nothing. Stuart runs Green Jersey, a cycling tour company out in the Wairarapa, a region just outside of New Zealand’s capital city Wellington, and he’s offered to show me around.

The Rimutaka cycle trail is a 113 kilometre long path that loops around the Rimutaka range, east of Wellington. One of New Zealand’s Great Rides, and a part of  Nga Haerenga – The New Zealand Cycle Trail, it takes riders from Petone’s foreshore across the Rimutaka Range to Wairarapa’s wild south coast. Along the way cyclists go through the thickly wooded Rimutaka Forest Parkand, along the gentle gravel trail of the Hutt River, mouth of the Hutt River at the historic site of the Hikoikoi pā, one of the largest Māori settlements in pre-European New Zealand, hills formed by the country’s seismic shifts, rugged farm tracks, right out to the tumultuous seas of Ocean Beach and Turakirae Head, home of the largest seal colony in the Wellington region, and the trail’s end at Orongorongo River. 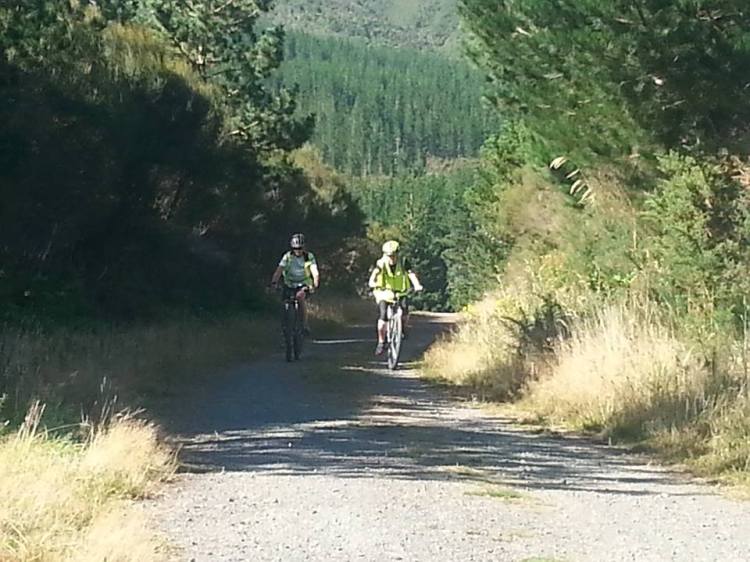 But we begin with the rail incline – a steep hill that trains struggle with. The Rimutaka Rail Incline is part of an old railway line connecting Wellington and Wairarapa, with 4 tunnels, 2km single track, 6km double track and 15km of unsealed gentle slope on the Hutt Valley side. It runs from Cross Creek in the Wairarapa through to Summit, at the top, funnily enough, the highest point 18km trail, along rugged paths and gritty trails. A particular section, the fell, is famous. The 4.8 km 3 ft 6 in gauge railway line between Cross Creek where we start, and Summit, on the original Wairarapa Line, has an average the grade is 1 in 15, which is pretty steep, as I see from the exhibits at the nearby Fell Museum in Featherston, home to the only remaining Fell Engine in the world. After every downhill journey the brakes on the engine had to be replaced, having been clinging on to the track so tightly, and the worn metal is there for evidence.

New Zealand seems to be going through a phase of turning disused railway lines into cycle trails, right from the Huaraki in Northland down to the Otago trail bisecting the South Island. It’s easy to understand why – scenic and sensible in terms of getting from you a to b, as well as readily routed, the trails are an ideal way to see the country.

Or at least that is what I tell myself at the start of the trail, as Stuart is unloading our bikes and packing our bags full of cereal bars, before we set out on this famous incline. It’s not as bad as I fear. Cyclone Luci appears to have drifted past us, and the main result of the breeze is a delicious scent of grass and trees wafting past. Although at a steep gradient for trains, even my little legs are able to cope, once the gears have kicked in. We’re only going a short way, up to the Summit, but it’s the toughest part – as those train brakes are evidence to.

When we reach the 576 metre Summit Tunnel, we turn the cycle lights on, although we soon switch them off again for fun. There’s something almost existential about cycling towards a hole of light, we no idea just how close other people or objects are to you. The practical and philosophical nature starts to unnerve me a little, and evidently Stuart too, as he suggests that we flick the beam back on again.

At Summit I am rewarded by flushing toilets, hurrah, but more importantly, a sense of achievement. The clouds block most of the view, but it’s rolling hills and farmland all the way from here and through to Cross Creek where the trail opens out in the ‘agricultural breadbasket’ of the Wairapapa.

I’m short on time, so to show me around, Stuart drives me to Ocean Beach, an area of ridged coastline formed only seven thousand years ago. It’s still a workout though, the steep stairs up to the lighthouse leaving us both breathless. We stand for what seem like ages, talking life and love, and cycling – the broad skies and brash waves, white tops pounding the rocks and gusting winds wailing around us seem to incite that sort of big thinking.

As this is just a taster for me, we go and taste: as well as fine scenery, there’s the option of trying some of New Zealand’s finest wine along the way. The Wairapara is known for its Pinot and Sauvignon Blanc, courtesy of low rainfall, hot summers, and long dry autumns, and Green Jersey can either cycle with you, sort a cycling route for you, or pedal you around in their rickshaw as you get slowly sozzled on samples. The main town for the wines is Martinborough, and the tiny spot (only 1330 full time inhabitants, rising to up to 30,000 at weekends) is unique in that all the wineries are accessible from the town centre without a car. Founded by a man named Martin, the roads span out from the centre in the shape of the Union Jack, and are named after places that he had visited – and so it is that Kansas is on a diagonal to Strasbourg, and Cambridge cuts across New York. We stop for tastings and lunch at Poppies.

On the way I ask Stuart why he chose to Poppies. He sighs. ‘Everyone wants to marry Poppy.’ He’s right. I want to marry Poppy, although she is happily wed to childhood sweetheart Shayne, after a chance meeting whilst working at a wedding twenty years after they had parted as teenagers. Standing in the contemporary grey walls that feel comforting with their glorious light bulb chandeliers, piled barrels and grand Italian opera playing, she oozes enthusiasm about the vines, their grapes, and ultimately, their wines. The Pinot Gris in particularly is sweet, fresh, and the perfect accompaniment to a tasting platter which tumbles with stuffed vine leaves, fresh salmon, roasted peppers, homemade hummus, frittata, seared courgettes, and toasted flatbread.

Even without the wine diversion, I can understand why this part of the country is a haven for Wellington weekenders. Windy, steep, and sometimes too much for a train, but beautiful, vibrant, natural and exhilarating for cyclists of all skills. Inhale deeply, press down with the legs, and roll through some of New Zealand’s most beautiful landscape.

There’s a glass of wine waiting at the end.

I travelled with Green Jersey, who organise guided and supported tours along the trail and local wine regions, over one or more days. http://www.greenjersey.co.nz/ Located in the Wairarapa, they are an hour train journey or drive from central Wellington, and can meet riders from the station. They use Avanti Discovery 8 bicycles, and provide helmets, pumps, full repair kits, maps as well as food and all accommodation bookings, depending upon tour choice.