After a 115-date touring cycle for acclaimed 2012 album Shields Brooklyn band Grizzly Bear could be forgiven for being a bit tired and laid back. But it’s Sydney’s Opera House, it’s the final date, and as a subsequent interview with The Guardian suggests, they have no idea when they will be back, the future being a ‘question mark.’ Lanterns illuminate the stage, their arrival seeing the house so dark that only the glow of the laptop is apparent. Once folk to the core, they have moved to something darker and more complex, waves of discovery, despondency, edginess and shifting time all being explored in Shields and on stage tonight.

There a reason that this venue is iconic. Sound is superb, and suited to the carefully cultivated and rich, deep hues of music that Grizzly Bear create and craft. The crowd are more than appreciative, and as frontman Ed Droste quips, it feels wrong to have more than one or two beers and get shirtless and rowdy in such a space.

But it’s not just the venue. Tonight is about a talented, passionate and hardworking band. Why would you need to get tanked up and physical, when all the senses and synapses are fired up by the sound that fills the space around. Exalted and magnified, the body quivers and quakes, shards and slices of music direct and deep. Songs of crushing hopes and brooding dreams still have a gentle charm to them, enabled by the lazy lilt of the interplay between the five band members.

Still on stage and not particularly conversational, the music does the talking, and acoustics here let them shine. The set list includes Knife, On a Neck, On A Spit, Speak In Rounds and Lullabye, ending with an ambient acoustic version of All We Ask.

It’s magical, a night of celebration and a natural fitting end to a long slog for the boys. A dreamy start before a long and well deserved night’s sleep no doubt. 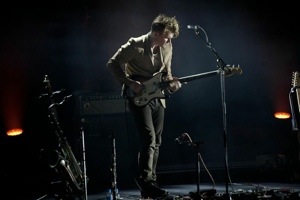