It’s only September but we, we being Ned Mortimer and Vedantha Kumar, aka August & After, and myself, are holed up in a pub in Stoke Newington, drinking clove infused hot toddies and warming red wine, listening to the rain lash down, and soundtracked by some noisy 1980s classics (like the aforementioned red red wine) and a rather vibrant football match (Swansea v Liverpool, if you are interested). It’s one of those evenings that started off full of frustrations, and ended up full of fun and friends. And the personalities behind August & After are one of the main reasons for that.

An alt folk group led by Ned and Vedantha , and supported by an evolving but essential group of musicians, they are winning fans and friends by the dual sworded approach of creating great music and being genuinely nice guys. Whilst clearly passionate about music, they also love life and are interested in it, and so throughout our conversation I continually have to work to bring the conversation back to their music, so keen are they to just chat about what interests them – topics including the UN, Syria, sustainable development and international law. Heavy stuff for a Monday.

The band released their debut album Embers this year, a collection of ten songs that span the indie folk genre, with enough influences and alternative takes on it to keep things interesting. Part of the reason for this is the number of influences that the band cite, almost ticking off genres, although genuinely so. Whilst Ned and Ved sit and argue as to what counts as alternative, I learn that Ved used to be very into his hip hop (‘I used to make hip hop cassettes all the time to try and boost my kudos at school’), Ned is going through something of a classical music phase (‘I used to listen to it all the time, but our new viola player recently sent me stuff and I am having to reacquaint myself’), Ved listened to the latest Bastille track thirty times today (‘I tend to listen to only a little, but repeatedly, and really focus on it’) and that the band’s name is inspired by Ved’s favourite band ever, The Counting Crows. 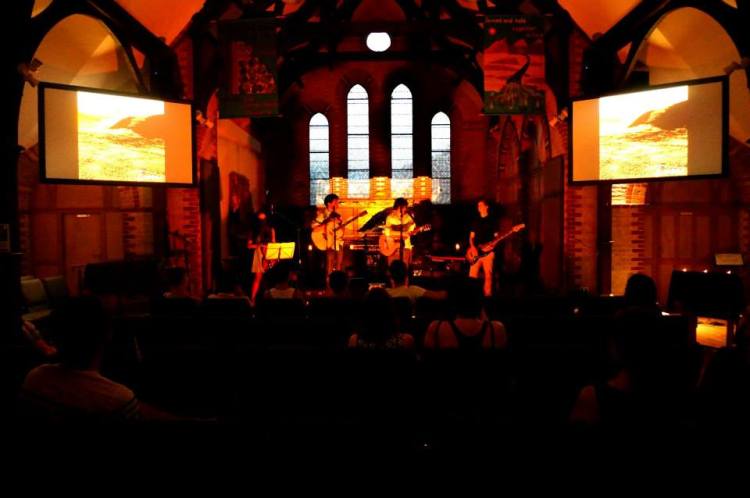 ‘We asked our friends to choose a name from all of those that we suggested. All of his included the word August or some variation on it. Other than ‘Gentle Beginnings’ or something shit like that. Says Ned. ‘It’s fair to say that I was very against it at the start; took me a long time to come round to it. In fact, I hated it. I was afraid that we would turn into some kind of soppy band. But now I see that it reflects our sound (which isn’t soppy) and, without sounding wanky, has a lot of branding potential for later down the line, and won’t restrict our sound.’ True to their word, they recently held an August & After Party. Although they see the core of their style and sound remaining very much as it is now, gentle melodies, resonant chords and a folk vibe, they are experimenting with electronica, which may make an appearance later down the line.

They’ve just started performing new songs, which are germinating and evolving as they go. The usual process is to write individually, and then bring to each other to develop the structure and performance. This means that whilst there is an August & After sound, varieties and variegations find their way in. Ved writes slightly more politically or socially commentating pieces, like Waltz For Marie, influenced by observation of a domestic violence occurrence, although he is keen to point out that ‘I’m not Billy Bragg or anything.’

The band have just been granted a residency at the legendary Ronnie Scott’s Jazz Bar, and will be launching a new song each month, and recording and filming as they go to form a mini EP. As with Embers, they’re keen to develop lots of different projects, and keep very hands on, enjoying the branding and business side of things. It’s fun, the marketing and developing side of things, but it’s mainly about being yourselves. You capture that as a band and a brand. As long as you keep focused on that it’s fun.’

Not that they wouldn’t get involved with a label – the benefit of time and contacts would certainly help, and they are not put off by the sceptre of music industry at all, being ‘surprised at how few dickheads there are.’ ‘Where are all the dickheads?’ asks Ned. Should an opportunity arise, whilst money from the label would be nice, it’s not the main attraction for them. Unusually, success is not being able to live off their music, but ‘headlining Latitude and being signed to 4AD. Like The National and Bon Iver.’ Not so unusual then maybe.

Part way through the interview Vedantha gets a text. ‘Ned’ he shouts, ‘Have you been using my Mum’s shampoo again? She keeps giving me stick, it just disappears.’ Ned has to go and make a quick call to Mrs Kumar to apologise, his glossy locks shimmering as he goes, his smile beaming as he comes back, bollocking free. Having met during their first week at Cambridge university (Ved smiles as he tells the story of how actually he wanted to jam with a another friend of theirs, having previously been lead guitarist in a funk rock band and not keen to give up his coveted position) they are now very much the best of friends – so close that they share shampoo with relatives it seems.

It’s a Monday night and the day has been long. Rock’n’roll to the core, I am good and go home, whilst they head off to meet friends. On our way to the station Ned can’t stop taking photos on his new toy, playing with exposure and distance, flicking away at the moon and his mates, and anything else that catches his eye. Ved is softly spoken, asking questions, interested in me and my thoughts, reversing the usual journalist-interviewee dynamic. We all leave with smiles, Monday evening turning out much better than it started.

August & After, they will charm you, photograph you, serenade you with songs, and win you over.

3 thoughts on “An interview with…August & After”