Up and coming punk/alt rock band House Party Massacre have come a long way from demos in the maths room. Blistering rock, riotus gigs, but also damn nice guys. I caught up with John, bassist and lead vocalist, to learn more.

So, a brief history of the band – how did you get together?

We all went to Secondary school together at St Thomas More in south west London and our music teacher was keen to get a school rock band going so Rocco and I (John) joined up initially as backing singer and bassist. After a couple years of playing covers, other members of the school band left to join other sixth forms and Rocco and I decided to kick start the band again, we invited Seb (drums) and Fil (bass) to join us. I moved to lead singer and Rocco to lead guitarist, and we started playing covers by The Kinks, Nirvana, Chuck Berry, The Beatles, System of a down etc. By late 2009 we had written our first 2 songs Not Ready and Pavements turn to red, and performed them at a school showcase that year. We practiced every Friday after school in the school practice rooms and recorded our first demos in a maths classroom.

Lots of teenagers dream of being in a band. What was it for you, and why did you make it a reality rather than just a dream?

I guess we all joined for slightly different reasons but the core of our desire to join was a love for rock music: a love for playing and creating rock music and feeling as though we had to do more than just listen to it. We found ourselves with a chance to try and create the music we loved and we saw it is a chance that couldn’t be missed. It might sound cliché but I was inspired to join after listening to the Nevermind album by Nirvana, I’d never heard or felt so much passion as I did when I heard Kurt Cobain scream and I felt a need to be a part of it somehow, that somehow was House Party Massacre.

Would you say your sound is similar to that of Nirvana?

It’s always difficult to attach a label to a band’s sound but I guess our sound could be described by our melange of influences, including: Nirvana, Joy Division, System of a Down, The Beatles, Led Zeppelin, The Flaming lips, Red hot Chilli peppers etc. Fans would probably say we’re a mixture of pop-punk, punk and a dab of metal.

So since those early days and the formation in 2009 as House Party Massacre, what has changed?

The size of the venues we play, we bring more people to our shows, our ability to play and write has increased, and we’ve got a different arrangement. We’re older and wiser and our work as a band trying to make it is more focused and efficient than when we started out, we also now have a manager and we have more useful contacts.

Four individual people – what do you each bring to the party?

So instrument wise it is myself, John, on bass and lead vocal, Fil  on rhythm guitar, Seb is our drummer and Rocco plays lead guitar and does backing vocals). I’d like to say I am probably the funny one – and am a martial arts fanatic. Fil is really funny and is a keen comic book reader, he co-hosts a comic book blog called Sons of Krypton. He is also really keen on film, especially the works of James Dean. Rocco is the ambitious one, he’ll take any gig anywhere and his drive has really helped us get places, he’s the most keen on metal of all of us and is just a lovely guy really. Seb is really good for bouncing ideas of when we’re writing, he’s a big pulp fiction fan, and he’s also a bit of a gamer.

What are you listening to at the moment?

I just got back from Bestival, so I’ve just been going over my favourite acts from the weekend, Swim Deep, Dog Is Dead, Fatboy Slim, Snoop Dog, Wu Tang Clan and my favourite act of the weekend, The Flaming Lips. I’ve also recently got really into Tame Impala and My Bloody Valentine. Fil and Seb and really into this band called DLZ and this American rapper called Watsky (He does a killer remix of Ni**as In Paris by Jay-Zz and Kanye West). Rocco’s really into Pierce the Veil at the moment.

Does being in London have a big influence on you?

None of us have really lived anywhere else so we can’t really quantify the influence London has on us, I think all of us like living here, there’s always something going on that’s for sure and we have written songs about London and things that have happened in London, we all grew up here as well so you could say we have a London mentality, whatever that means.

House Party Massacre – sounds intense. What are the wildest gigs you have played?

One sticks out: we played an EP release show for our first EP New Breed where everyone ended up getting on stage and stage diving – we ended up breaking the stage. 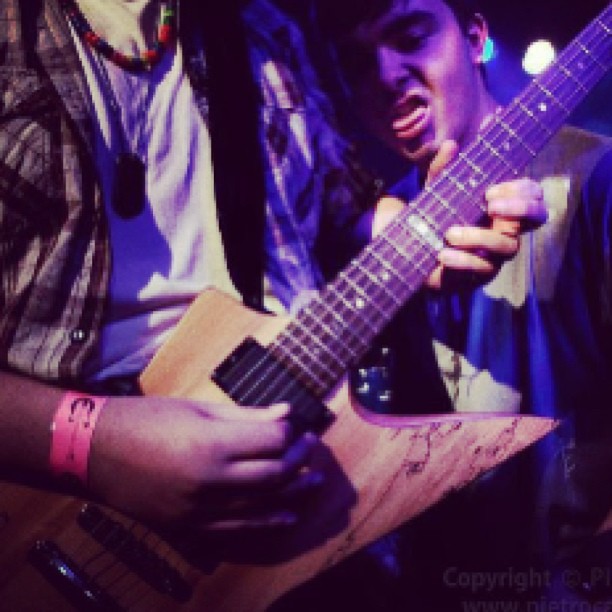 And conversely, what do you do to chillout?

We all have different ways of chilling out, I () like long distance running, reading (usually philosophy), playing bass or just sitting down with some headphones and listening to a new album. Fil would probably sit down and watch a film or show or read a comic. Seb  likes to play some video games to chill out and Rocco likes to go for a drive or bike ride or just play some guitar.

Is it hard being a musician and trying to make it as a band?

At our age, it is difficult because it’s not financially feasible at all unless you have rich parents which none of us do. Even if you do have great songs written, if you can’t get them recorded or promote the recordings it doesn’t matter, no one will hear it and you’ll go nowhere. There are absolutely no guarantees in the business which is why you don’t last long if you don’t love writing and playing your music – we’re not in it for fame or money we recognise that being in a band now is not something you do to make a living. What I really want for this band is for it be an outlet for the creative potential I can feel we have, I want us to write the songs I know we can, and then I want to share our work with the world. Anything that comes from it is a bonus in my mind, the main payment is the joy received from creating something awesome.

What does ‘making it’ mean?

I think generally for us it means playing the big festivals in England, although Rocco would probably say that if we played Warped tour in America we’d have made it. I think playing Reading would be awesome, since watching Nirvanas Reading set. Making it also means getting signed by a relatively big company and them saying ‘here’s a well kitted out studio we’ve booked it for a month, go and create.’ That would be awesome.

What’s coming up in the next hour, the next month, and the next year?

The next hour, my Chinese will be delivered hopefully, the next month; we’ve got a couple gigs, we’ll be taking part in Oxjam’s charity gig event. The next year: if we’re still together I think we’ll have a full length album out or at least recorded.

If we’re still together. With so much potential, I sure hope so.