Sat on Exponential’s  roof top, on a windy July evening overlooking Mayfair, I have a chat with Bwani Junction, (left to right)Dan Muir (Lead Guitarist), Fergus Robson (Bassist), Jack Fotheringham (Drummer), and Rory Fairweather (Front-man) and ahead of the release of new single Papa Candy. Having patented their own exhilarating strain of something that could be described as ‘fusion funk’ or ‘skewed indie’ or ‘leek wielding’ (according to Rory, not me) or ‘Afro-Scottish’ their sound is always infectious, bristling with vigour and passionately delivered. 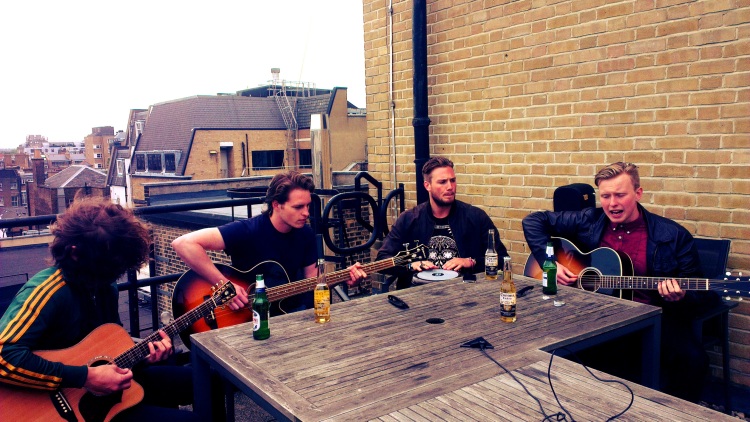 Having been playing together since the age of 11, meeting at school, they have grown together, and their sound has evolved with them. Papa Candy does sound like more ‘grown up’ track, evolved and matured with its rocky vibe and bolshy  spirit. As much as lyrics like ‘the milkman is on fire’ can be. But then when one of the best band of all time can chat sing about ‘Sitting on a cornflake, waiting for the van to come’ they are in pretty good company. It’s nice chatting with boys. Not an insipid limp way, but the genuine buzz as they bounce of each other, chatting about their week and revisiting old stories is contagious and inclusive.  They make each other laugh and they make me laugh.

A good ninety per cent of reviews or articles on Bwani Junction will use the words ‘Vampire Weekend’ as an adjective to describe them. I put this to them , and without exception they all roll their eyes. ‘I don’t get it’ says Dan. I mean the first album was all…’ and he knocks out a crisp rock melody. It’s probably something to do with the almost tribal beats that underpins the songs, no doubt influenced by Bhundu Boys, the Zimbabwean band that Gordon, manager/bantering badger/general father figure (both literal in the case of Rory and metaphorical for the rest) used to manage.

Papa Candy is out on July 14th, but as yet there are no crazy plans to support the single launch. Previous single Two Bridges famously saw the band playing on the Forth Bridge. Jack reveals that ‘we thought about playing the Eiffel Tower, it has to be somewhere higher, bigger and better. Someone, who should probably remain nameless suggests that the band mimic Muse and play in space. ‘That would be high!’

Gordon, having been quietly sipping his birthday beer throughout suggests that the best option would just be to get high. Whilst I am pretty confident the band had not partaken in any substances today, they are certainly a band looking to have a good time.  ‘What’s the point otherwise?’ asks Rory.  ‘Get out of your own arse’ says Dan.

One band they do respect and who are certainly not stuck up any rectal pipes are Little Comets, one of only many that Bwani Junction have toured with (The Vaccines, M, and Tribes amongst others this year). ‘They are everything that we aspire to be as a band. Tight, passionate and great lads.’ This is a very brief snippet – the actual raving about the Geordie band takes up at least ten minutes and I have to remind the guys that we are here to talk about them.

But what comes across in their testimonial is the importance of having a good time, enjoying being in a band rather than seeing it as a chore, and the belief that they have something worthwhile to deliver with their music. One of the bands they would love to support is The Rolling Stones, partly out of respect for such longevity, but mainly to ‘see if we could keep up and party with a bunch of seventy year olds.’ 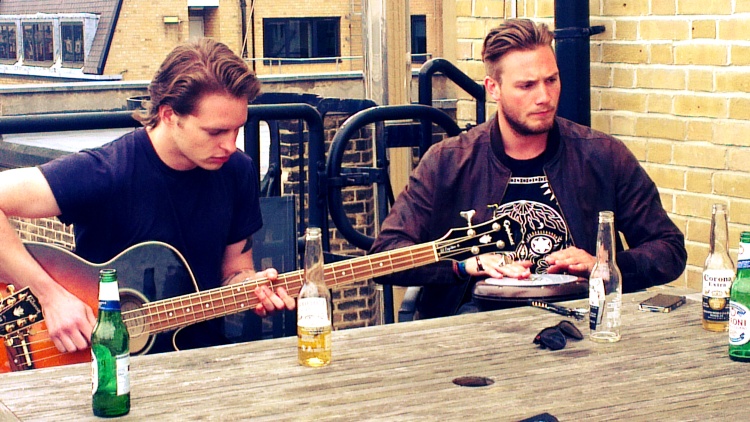 They envisage themselves still being in the game in at least twenty years, or at least that is when they promised me that they can reveal the real story behind the name of their new album due out this autumn, the name of which I do know but have been sworn to secrecy about… Full of brave bold storytelling and tongue in cheek lyrics, the songs, that they treat me too previews of, are wildly colourful and glisten with brilliant funk fusion.

Kindly put up by the company I work for, ad network Exponential, the interview takes place on our office balcony with a view of London, a fact that impresses the band. Dan is particularly enamoured, as is Jack, asking as he cracks open another beer ‘I love this space. Can we come and work here?’ ‘Sure’ I offer up ‘you can be our house band.’ ‘I’ll be your doorman, this place is awesome.’

Tempting as it is to have Bwani Junction knocking around the office, please, stick to the music guys. You do it so well.

New single Papa Candy is out on July 15th on the band’s own Aksatak label.